It is important whilst practising thematic essay responses to literary texts that you familiarise yourself with the AO’s required. Generally, for AQA & Edexcel you require a combination of AO1, AO2 & AO3 skills. For the AQA paper, Section A is usually a thematic question and section B is a character question. For the Edexcel paper this order is reversed; character first, then thematic.

SELECTING QUOTES IN THE EXTRACT

When selecting quotes from the extract provided try to consider what major events occur prior and after this moment in the text. Consider the setting, tone, and voice of the characters and how this contributes to the overall mood. Highlight who is speaking and how the character uses speech and action to portray the theme/character in the question. Look for key words and/or literary devices that you can use for analysis in your argument.

1.In this extract, Lady Macbeth is seen worrying about Macbeth’s inability to act unlawfully as it threatens her ambition to achieve a new royal title. “I fear thy nature, It is too full o’th’milk of human kindness to catch the nearest way.” She complains Macbeth is too full of human compassion which damages his chances at unshackling himself from his moral duty as a loyal follower and friend to King Duncan. ‘Milk of human kindness’ is a Shakespearean expression which epitomizes milk as a sign for humility and gentleness. The expression used by Lady Macbeth renders her husband Macbeth too emotional, sympathetic and nurturing like a woman. She frequently resorts to insulting his masculinity in this manner in order to drive Macbeth to act as he should and prove her wrong. Lady Macbeth fears that his emotions tamper with her scheme to usurp the crown because it will prevent him from committing the crime. His status, sympathy, and loyalty to the King threaten his ambition. From this soliloquy, Shakespeare creates tension and drama for his reader as we begin to ponder how Lady Macbeth is going to manoeuvre around her fears and encourage her husband to complete their ambitious plotting of regicide. It is clear from the very beginning of the play that Lady Macbeth acts as the driving force for Macbeth’s ambition in order to achieve their desired goal.

SELECTING QUOTES FROM THE TEXT AS A WHOLE

Use your list of quotes that you have created in class and at home that relate to the theme. Remember to draw your points from different parts in the play as this will show a deepened understanding of the text. You can also consider context for this part of the question as this can bulk up your argument. We suggest including 2 references to the text as a whole. 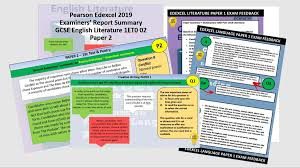